It all started here...

Ever walked into a Wal-Mart and wondered what the first one looked like?  Or who opened it?  Well, here's your chance to see. 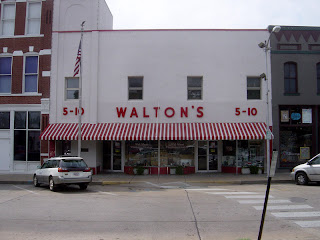 The first Wal-Mart store was opened in 1962 by a salesman named Sam Walton. Today, Walmart (the brand by which "Wal-Mart Stores, Inc" has used since 2008) has over 2 million people employed and is the worlds largest retailer. The first store was called "Walton's Five and Dime".

Hope you enjoyed that little tidbit of history that most people don't realize when they walk into a Wal-Mart to by discounted products.
Posted by Taxation at 9:41 AM 3 comments: